Saturday of Souls: Orthros at 9:00am followed by Liturgy at 9:30am. Memorial Services (off Site)

Sunday of Orthodoxy. Orthors at 9:00am followed by Divine Liturgy at 10:00am

Sunday of St. Gregory Palamas: Orthors at 9:00am followed by Divine Liturgy at 10:00am

Sunday of the Holy Cross, Orthors at 9:00am followed by Divine Liturgy at 10:00am

Saturday: Annunciation of the Theotokos Divine Liturgy at 9:30am

Sunday of St. John Climacus, Orthors at 9:00am followed by Divine Liturgy at 10:00am

During Holy Week, we follow the footsteps of Christ, Who passed from Death to Life. We, too, experience Christ’s journey to the Cross. This journey takes us to the reality of sin and death. Christ conquered sin and death, and His triumph is ours as well. By uniting ourselves with Christ, we discover that death has no power over us.

Open your heart to Christ! The events of Holy Week are the most moving of the year. To get the most out of them, participate in each day’s services. Make prayer, fasting and Holy Communion essential parts of your Holy Week.

Saturday: Saturday of Lazarus Liturgy at 9:30am On Lazarus Saturday, we find that death is the enemy which Christ cam to conquer, and that Christ is truly the giver of life! The raising of Lazarus is celebrated on this day. We, too, receive the promise of new life. We celebrate the divine love that brought Lazarus back to life --- the same love that Christ offers to each one of us today. The Scripture readings are Hebrews 12:28-13:8 and John 11:1-45.

Saturday: Pancake breakfast and making of Palm Crosses after Liturgy at 10:30am

Palm Sunday, Orthors at 9:00am followed by Divine Liturgy at 10:00am Palm Sunday celebrates Jesus’ triumphant entry into Jerusalem. We receive Palms on this day to show that we too accept Jesus as King, and that we are willing to follow Him to the Cross. The scripture readings are Philippians: 4:4-9 and John 12:1-18.

Palm Sunday: Bridegroom Service at 7:00pm This Service helps us understand Christ’s passage from death to life – and how each of us can also become free from sin and death. So we commemorate: 1) Christ the Bridegroom. The priest carries the Icon of Christ the Bridegroom in procession. We behold Christ as the Bridegroom of the Church, bearing the marks of suffering, yet preparing a marriage Feast for us in God’s kingdom; 2) The Blessed Joseph, who was thrown into a pit and sold into slavery by the brothers, and who later became a powerful ruler. In the same way, Christ was rejected, betrayed and crowned with glory in God’s Kingdom; 3) The Barren Fig Tree, which Christ cursed and withered because it bore no fruit. The tree is like those who have heard God’s word but fail to bear fruit by not obeying it. The Gospel reading is Matthew 21:18-43.

Monday: Bridegroom Service at 7:00pm This Service urges us to be spiritually prepared to receive Christ. We should take this time to reflect on the Parable of the Ten Virgins. The maidens who filled their lamps with oil were prepared to receive the Bridegroom. Those with empty lamps where shut out of the marriage feast. So each of us should light our lives with faith and good works and be ready to receive Christ. The Gospel reading is Matthew 22:15-46; 23:1-39.

Tuesday: Bridegroom Service at 7:00pm This Service asks us to repent our sins and to forgive others. We remember the sinful woman who anointed Christ in anticipation of His death. Her repentance and love of Christ is the theme of the Hymn of Cassiane changed tonight. We, too, may be forgiven if we confess our sins and obey God’s will. The Gospel reading is John 12:17-50

Wednesday: Holy Unction at 6:00pm The Sacrament of Holy Oil is celebrated on Holy Wednesday Evening when we seek to be reconciled with God. The priest anoints us with holy oil that we may be healed physically and spiritually. The Orthodox Church has always viewed body and soul as inseparable, and for that reason has stressed the necessity for preserving both in good health. The Sacrament of the Holy Unction is an enduring sacrament of faith for healing the sick and forgiving sins, with the most familiar celebration of the sacrament on Great Wednesday of Holy Week.

Thursday: Liturgy of St Basil at 10:00am At this solemn service, we celebrate the meaning of what Christ said and did at the Last Supper. Before the great entrance, this special hymn is changed: “At Thy mystical supper, O Son of God, accept me today a communicant, for I will not speak of Thy mystery to Thine enemies, neither like Judas will I give Thee a kiss, but like the thief will I confess Thee: Remember me, O Lord, in Thy kingdom.” Holy Communion from the Lamb (The “Amnos”) is consecrated at this Liturgy. It is used throughout the rest of the year for Holy Communion for the sick and for those who cannot come to Church.

Thursday: 12 Gospels/Passion of Christ at 6:30pm On this day, our Lord went to the Cross and died to atone for our sins. The power of death and the reality of evil rule the world on this dreadful day. Yet, Christ’s death marks the beginning of His – and our – victory over death’s power. This solemn service consists of 1) The Twelve Gospel Readings. These narratives from the four Gospels relate the events of Jesus’ Holy Passion, and His last instruction to His disciples; 2) The procession. The Cross is adorned with a flower wreath, and carried in procession. This symbolizes Christ’s coming to Golgotha to offer Himself as sacrifice for the sins of the world.

Friday: Royal Hours at 10:00am This Friday Morning Service retells the story of Christ’s passion with the addition of prophecies, psalms and hymns. These services, or “Royal Hours,” help us keep vigil at the side of the crucified Christ, and relate Jesus’ suffering to our own redemption.

Friday: Sunday School Retreat and adorning the Epitaphios with flowers

Friday: Lamentations at 7:00pm We lament Jesus’ undeserved death for our salvation. With both sorrow and joy we sing the Lamentations to Him Who is symbolically buried, yet Who we already know is the Risen Lord. The Epitaphios is taken in a candlelight processing around the Church.

Saturday: Liturgy of St Basil at 10:30am Today is a day of hope and waiting. We know that because Christ died, death is no longer the end of life. Today’s Liturgy anticipates the Resurrection. It includes readings form the Old Testament and special hymns. The Scripture readings are from Romans 6:3-11 and Matthew 28:1-20

This service is a festive one! The Acolytes hand out bells and noise makers to the children in attendance. As the Priest showers the church with rose petals and bay leaves, rejoicing in the celebration of the resurrection the children are encouraged to make a “joyful” noise! 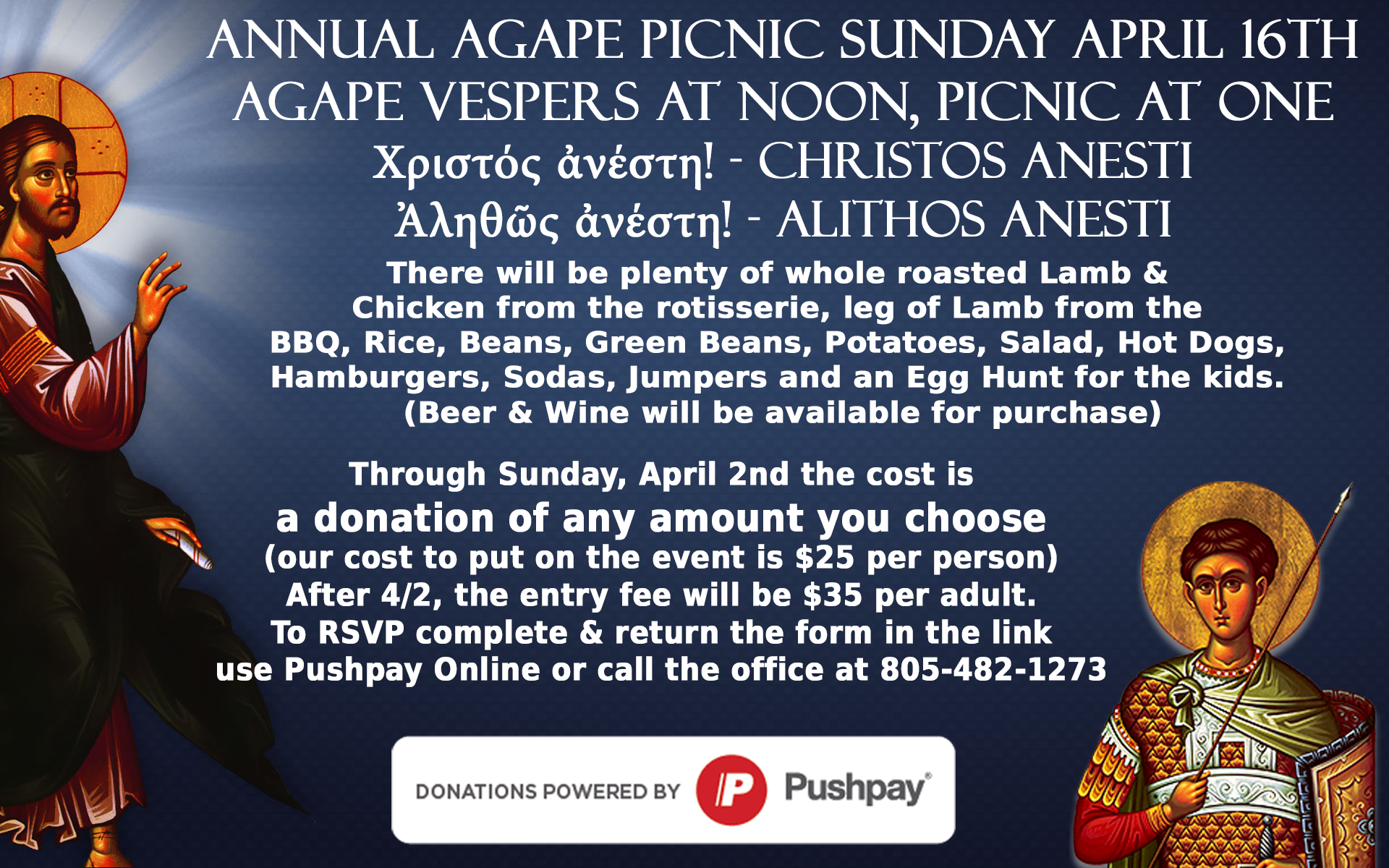 Scouting and It's Founders

Robert Stephenson Smyth Baden Powell also known as BP or Lord Baden. Powell was a lieutenant general in the British Army, writer, founder of the Scout Movement and first Chief Scout of The Boy Scouts Association.

After having been educated at Charterhouse School in Surrey, Baden Powell served in the British Army from 1876 until 1910 in India and Africa. In 1899, during the Second Boer War in South Africa, Baden Powell successfully defended the town in the Siege of Mafeking. Several of his military books, written for military reconnaissance and scout training in his African years, were read by boys and used by educators to teach boys life skills. Based on those earlier books, he wrote “Scouting for Boys,” published in 1908 by Sir Arthur Pearson, for youth readership. He held the first Brown Sea Island Scout camp on July 25, 1907, which is now seen as the beginning of Scouting.

The first Scout Rally was held at The Crystal Palace in 1909, at which appeared a number of girls dressed in Scout uniform, who told B - P that they were the "Girl Scouts", whereupon BP and his sister Agnes Baden Powell formed the Girl Guides Movement. After his marriage on 30 October 1912 to Olave St Clair Soames, Baden Powell and his wife actively gave guidance to the Scouting and Girl Guiding Movements. Baden Powell lived his last years in Nyeri, Kenya, where he died and was buried in 1941.

In 1909, Chicago publisher William D. Boyce lost his way in a dense London fog. A boy came to his aid and, after guiding the man, refused a tip, explaining that as a Scout he would not take a tip for doing a Good Turn. This gesture by an unknown Scout inspired a meeting with Robert Baden Powell, the British founder of the Boy Scouts.

As the first national Scout commissioner, Beard helped design the original Scout uniform and in- troduced the elements of the First Class Scout badge. “Uncle Dan,” as he was known to boys and leaders, is remembered as a colorful figure dressed in buckskin who helped form Scouting in the United States.

Ernest Thompson Seton immigrated to America as a youth in the 1880s. His fascination with the wilderness led him to become a naturalist, an artist, and an author, and through his works, he influenced youth and adults. Seton established a youth organization called the Woodcraft Indians, and his background of outdoor skills and interest in youth made him a logical choice for the posi- tion of first Chief Scout of the BSA in 1910. His many volumes of Scoutcraft became an integral part of Scouting, and his intelligence and enthu- siasm helped turn an idea into reality.

James E. West was appointed the first Chief Scout Executive of the Boy Scouts of America in 1911. Although orphaned and physically disa- bled, he had the perseverance to graduate from law school and become a successful attorney. This same determination provided the impetus to help build Scouting into the largest and most effective youth organization in the world. When he retired in 1943, Dr. West was recognized throughout the country as the true architect of the Boy Scouts of America.

Sunday of the Canaanite